Chief Torain expressed how appreciative he was of the donation from Chaney’s Champions and announced that a Chaney Bear had already been given by the Fire Department to a 4-year-old girl whose house was destroyed by a fire on Christmas morning.

Chief Hess discussed how exciting it was to be chosen as a “ChampionOn Agency” and said that when he looked at a Chaney Bear “I can’t help but notice his heart shaped tummy which causes me to pause because this bear is not just any teddy bear. This bear, the Chaney Bear, is being provided by Chaney’s Champions with love and compassion.” 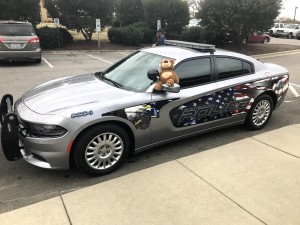 Chaney’s Champions was formed to honor the memory of Chaney James Corcoran, who passed away suddenly from SIDS at 10 weeks old. Chaney’s Champions provides teddy bears to organizations that encounter children in a crisis situation. The “Chaney Bears” are used to help bring comfort to children in need and provide opportunities to pay kindness forward, which embodies the mission of Chaney’s Champions to #ChampionOn with small tokens of kindness.

To fulfill its mission, Chaney’s Champions depends on the generous financial support from family, friends, & members of the community.

View all posts by chaneyschampions