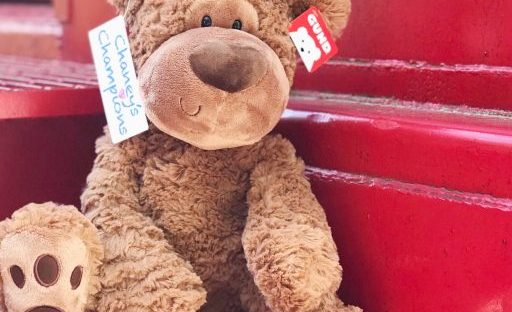 October 4, 2019October 14, 2019 chaneyschampions
New Partnership with Cary Police Department is being made possible through Marathon Row Fundraising Event held on June 29, 2019 at CrossFit Surmount in Apex, NC. This is the third partnership made possible as a result of the fundraiser. Donation event will occur on December 20, 2019
APEX, NC – Chaney’s Champions, a 501C3 non-profit based in Apex, NC, announces a new partnership with the Cary Police Department. The new partnership is being made possible through a Marathon Rowing Fundraising Event that was held in June of this year at Apex, NC CrossFit Affiliate, CrossFit Surmount. This is the third partnership that has been announced as a result of the successful fundraising event. Chaney’s Champions will be donating 100 of its GUND Chaney Bears to the Police Department on December 20, 2019 at 10am.
Chaney’s Champions was formed in 2016 and has donated 842 teddy bears to organizations that may encounter children in crisis situations. An additional 366 teddy bears are scheduled to be donated in the next several months, which will bring the total bears donated to 1,208. To date, Chaney’s Champions has donated, or is planning to donate, to the following organizations:
The donated “Chaney Bears” have been given by law enforcement officials to children affected by a variety of situations ranging from motor vehicle accidents to domestic violence incidents.
About Chaney’s Champions – Chaney’s Champions is a 501C3 non-profit located in Apex, NC. Founded in 2016, Chaney’s Champions was formed to honor the memory of Chaney James Corcoran, who passed away suddenly at 10 weeks old as a result of SIDS. Its mission involves paying it forward through random acts of kindness. The organization is currently focusing its work on donating teddy bears to area law enforcement agencies. The “Chaney Bears” are used to help bring comfort to children in need and provide opportunities to pay kindness forward, which embodies the mission of Chaney’s Champions to #ChampionOn with small tokens of kindness. To fulfill its mission, Chaney’s Champions depends on the generous financial support from family, friends, & members of the community. More information about Chaney’s Champions may be found at http://www.chaneyschampions.org

View all posts by chaneyschampions